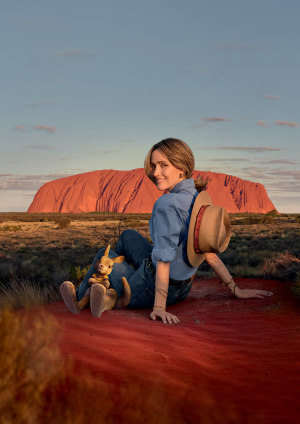 Tourism Australia is enticing international travellers from around the world to visit Australia this summer with help from a new brand ambassador.

Ruby, the souvenir Kangaroo brought to life by actress and Tourism Australia’s global ambassador Rose Byrne, takes viewers on a journey around the wonders of the Australian landscape and dives into its stupendous hospitality.

The campaign, Come and Say G’day, was directed by Australian director Michael Gracey and produced by FINCH . The goal was to capture the world’s imagination with a global publicity and paid media launch strategy that mirrors a major film release.

Tourism Australia solicited the help of M&C Saatchi to create the first major global campaign since 2016.

AdNews spoke with Australian creatives to ask the question: Why is the campaign so good?

Lee: “Creating a campaign that appeals to audiences across 15 culturally different markets is no mean feat and I reckon the team behind this one – no doubt under a lot of pressure and scrutiny – have done a good job here.

“I’d be lying if I said I’m bowled over by the idea of using a CGI stuffed kangaroo to sell our great – once sunburned, now waterlogged land, but I did watch the full nine minutes of the ‘G’Day’ short film and was genuinely entertained.

“I particularly enjoyed the not-so-magical American unicorn and felt that Ruby the Roo’s forgiveness of her friend’s flaws nods nicely to the warmth of our national character. This warmth extends to Rose Bryne’s delivery of the film’s call to action that I found to be authentically touching. If I didn’t live here, I reckon I’d come and visit.”

Tim Brown, executive creative director at Enigma, said: “Having worked on Tourism Australia I understand the challenge to create campaigns that work across multiple languages and different audiences. A character makes sense. The work has a warmth and charm that works well.”

Chad Mackenzie, chief creative officer at whiteGREY, said: “Another pretty epic film from Tourism Australia. It’s a lot of fun and the script writing is bloody clever. In fact, like most good animated films, the writing is what keeps you engaged all 9 minutes. A brilliant way of ticking off all the boxes needed in a tourism spot.”

Fischer Letts: “There is a reason Australia is considered second to only Hollywood for movie-making, as this campaign levels up in every way; from the high production quality visuals, sweeping landscapes, life-like CGI imagery and starring international superstars Rose Byrne, as Ruby the toy Roo and US fave, Will Arnett as Louie the toy rainbow Unicorn, as the two leading (CGI) stars.

“Leveraging the insights of the power of the globally recognisable icon – the Australian kangaroo – this campaign is unique as it builds a story around this recognisable symbol.

“Showcased in a beautiful narrative short film (ostensibly a 9 minute ad that has already been viewed 19 millions times!) – that cuts through the clutter of destination marketing and appeals to a wide-ranging audience who fall in love with these characters and are charmed by their personalities underscored with the warm welcome that is the signature Aussie way and counterbalanced by the outsider – in this case Louie the Unicorn, as they adventure together.”

Fischer Letts revealed that she enjoyed being treated to an experience where she was completely encapsulated and taken on a journey.

She said: “I love that at the heart of the campaign is a short ‘buddy’ film where viewers go on a journey, which to me speaks to the fact that Australia is hard to encapsulate, it’s bigger and bolder and there is so much to discover.

“The 30 second ads are really just teasers or a sneak peak, acting like mini movie trailers that drive the viewer to want to see more in the short film that showcases a myriad of Australia’s most iconic and beloved destinations weaved throughout a delightful story.

“Come and say G’Day definitely wants me to explore more and will no doubt have Australia on the International traveller’s wishlist.”

Have something to say on this? Share your views in the comments section below. Or if you have a news story or tip-off, drop us a line at [email protected]