Indonesia’s new criminal code has raised concerns among tourists as well as its citizens alike.

The revised penal code, unanimously passed by the Parliament, makes sex outside marriage punishable by up to one-year imprisonment, and cohabitation by six months, says Associated Press (AP) report.

However, only family members, including a spouse, parent and child, can file complaints with the police related to extramarital sex or against unwed couples who live together.

The new laws which will come into effect three years later will apply to Indonesians and foreigners living in the country, along with visitors.

Blasphemy laws have also been expanded from “one to six provisions” and can attract maximum five-year imprisonment.

As per the new law, abortion remains a crime in the world’s biggest Muslim-majority nation, but exceptions would be made for women with life-threatening medical conditions and in rape cases, given that the fetus is less than 12 weeks old.

The new code also bans “insulting” a sitting president or vice president, state institutions and the national ideology. The act, which is complaint-based and has to be initiated by office-holders themselves, could land a person in jail for up to three years, AP reported.

Besides the other changes, criminalising sex outside marriage has received the most spotlight with many critics slamming the law.

How will the new criminal code affect tourism in Indonesia? What are the concerns raised about the strict morality laws? We take a look.

Tourism in Indonesia and the new criminal code

Australia is the most perturbed about Indonesia’s new criminal code with some newspapers dubbing it as the “Bali bonk ban”, BBC report said.

Tourism from Australia plays a major role in contributing to Indonesia’s economy. As per BBC, thousands of Australians visit Indonesia’s tropical island of Bali every month. Weddings in Bali are also common and Australian students frequent the island every year to celebrate their graduation.

This new criminal code is likely to affect tourism in Indonesia, which was already hit because of the COVID-19 pandemic. Tourism could be affected in Indonesia due to the new laws criminalising sex outside marriage. AFP (Representational Image)

In 2019, a record 1.23 million Australian tourists travelled to Bali, as per Indonesia Institute, a non-government organisation based in Perth.

Statistica’s data showed that only 51 foreign holidaymakers visited the island in 2021 because of the pandemic.

Some argue that the ban on sex outside marriage would not affect tourists as for a police investigation to take place, the complaint has to be lodged by close family members, BBC reported.

However, a foreigner who had sexual relations with a married or unmarried local could possibly find themselves in the crosshairs of the revised code if a complaint is filed by a close relative of that local, said Indonesian MP Taufik Basari, as per Australian newspaper Sydney Morning Herald.

“It is indeed problematic,” he added.

MP Basari, who is a part of the parliamentary commission overseeing legal affairs, told the newspaper that the Indonesian tourist industry and Australians should not worry.

“Therefore, only interested persons could file a complaint”, Basari stated.

New code is a worry for many

Many critics have raised doubts about the new legislation. 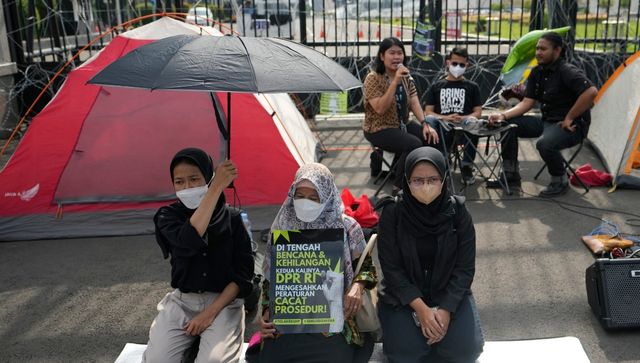 Many have raised concerns about the new criminal code in Indonesia. AP

Zainal Arifin, head of the Indonesian Legal Aid Foundation’s advocacy team, has cautioned that the revised code had “the potential to criminalise [Indonesian] people and the foreign tourists”, reported Sydney Morning Herald.

Maulana Yusran, deputy chief of the tourism industry board in Indonesia, has called the new code “totally counter-productive” as the economy and tourism industry had just started to rebound after the pandemic.

“We deeply regret the government have closed their eyes. We have already expressed our concern to the ministry of tourism about how harmful this law is,” he was quoted as saying by Sky News.

Putu Winastra, chairman of the Association of the Indonesian Tour and Travel Agencies (ASITA) in Bali, told CNN the laws would “make foreigners think twice” about coming to the Southeast Asian nation.

Some have also expressed concern that police probing the claims of sex outside marriage only if complaints are made by family members could lead to “selective law enforcement”.

“It means that it will only be implemented against certain targets,” Andreas Harsono, a senior researcher at Human Rights Watch told Australian Broadcasting Corporation (ABC).

“It might be hotels, it might be foreign tourists… that will allow certain police officers to extort bribes or certain politicians to use, let’s say, the blasphemy law, to jail their opponents” he added, as per BBC.

Canadian travel blogger Melissa Giroux, who stayed in Bali for 18 months in 2017, told BBC she was “shocked” that the revised code was actually passed, after years of discussions and protests.

“Many tourists will prefer to go elsewhere instead of risking going to jail once the law is enforced,” Giroux told BBC.

“And I’m not even thinking about the single people who come to Bali to party or the ones who fall in love during their travels,” the blogger added.

With inputs from agencies