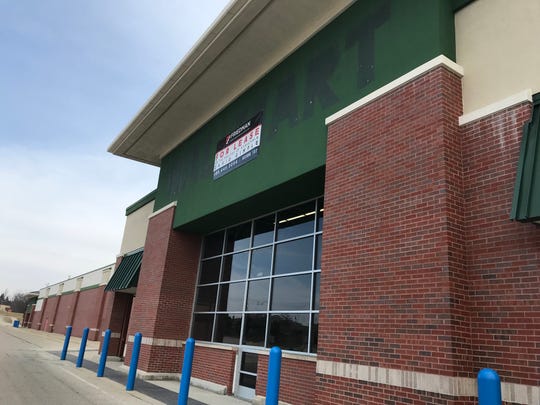 The less-faded paint previously covered by the Walmart store sign reveals the previous occupant of the 107,000-square-foot building in the New Berlin City Center off National Avenue. The store, vacant since 2015, will get new life not only as a 80,000-square-foot Burghardt Sporting Goods facility but also a 25,000-square-foot recreation center owned by the city, under a partnership between New Berlin and Burghardt. (Photo: Jim Riccioli / Now News Group)

New Berlin officials announced Tuesday that the city has officially entered into a partnership with Burghardt Sporting Goods, the longtime Milwaukee-area retailer who recently acquired Walmart’s former store, to open a public recreation center in the heart of the community.

The announcement represents the unveiling of a plan that was hinted last spring following closed-door negotiations between Burghardt and the city. The plan includes a land deal, in which the city will assume ownership of about 25,000 square feet of the 107,000-square-foot building off Moorland Road and National Avenue near Coffee Road.

“Burghardt’s has been wonderful to work with and I anticipate this partnership only growing stronger and more beneficial to both parties as we move forward,” Mayor Dave Ament said in a statement Tuesday.

Ament said the New Berlin Recreation Center will likely include fitness/dance/yoga studios, indoor/outdoor playgrounds, a teaching kitchen, a gymnasium, multi-purpose classrooms and locker rooms, plus offices and a mezzanine.

Aerobic and exercise classes offered through city programs are envisioned, along with the potential for volleyball and basketball tournaments in the gym.

“This will be an amazing addition to our community and in the most ideal location,” the mayor added.

Burghardt itself will offer a recreational element beyond its usual retail sales, according to city and company officials. The store will include wh a “state-of-the-art Performance Center,” featuring a HitTrax baseball and softball hitting facility.

City officials said their hopes is that the rec center will serve as a cultural facility, not just a place for sports and fitness.

“This recreation center will serve as an inter-generational, dynamic space where the City Recreation Department can create, cultivate, and expand a number of its current programming opportunities for city residents and program attendees,” the city said in a news release.

Among the events considered as part of the plan is summer day camp and cooking demonstrations.

Burghardt officials said the company is proud of its role in the partnership.

“We are thrilled to be working with the city of New Berlin to create a desirable and synergistic destination for residents and athletes,” co-owner Lynn Burghardt said in a statement. “The excitement surrounding this project has been overwhelming.”

Of course, Burghardt also has plans for a retail operation, in space more roomy than its current home at 14660 W. Capitol Drive in the city of Brookfield.

The new location will incorporate the business’ team and web sales departments and its screen-printing, embroidery and fulfillment operations. Some business operations will begin there by January 2021, but the retail store itself isn’t expected to open until March.

No timeline has been firmly set for the city’s rec center operations, which is still in the planning stages. The city’s planning staff directed questions to community planning director Greg Kessler, who was not available Tuesday to comment on those plans.

But Ament, in a phone interview Tuesday, said the city would likely develop its recreation center in stages, allowing for a possible addition on the land that the New Berlin acquired in the deal.

“We’re right now going through the design of the existing building, and at the same time, the design of the addition,” the mayor said. “We can go north with that building, but what we don’t want to do is design it just for the original building and then spend a lot of money on it and find out later we should’ve done something different.”

It’s likely the plans would be presented to the New Berlin Common Council as cost options, allowing aldermen to weigh in on how much the city should ultimately invest in a recreation center, Ament explained.

In addition to the buzz created by a new public facility, the deal also represents a revival of a key property in the City Center, New Berlin’s de facto downtown and its primary commercial district.

Originally, more than 20 years ago, city officials had envisioned the development of the commercial district along the lines of the Bayshore shopping center, with a mix of attractive, more-upscale retail establishments.

But the private sector favored a more traditional strip mall, including the city’s first Walmart. Then Walmart opted for a new store with even more space elsewhere.

The old big-box store has been vacant since 2015, when Walmart opened a new, larger supercenter further north on Greenfield Avenue and Moorland Road. The old store went into foreclosure in 2017.

Ament said the city had considered acquiring the entire parcel, but that proved too impractical, given the property’s value.

“The cost was just too much, and we didn’t think we needed that much space,” he said.

Enter Burghardt, which made the rec center a practical possibility through another another arrangement, Ament said. “We started talking about how maybe we could have a nice partnership here that could be beneficial to both sides.”

In March, Burghardt acquired the old Walmart, 15333 W. National Ave., for $3.26 million, setting into motion its plans to move from Brookfield to New Berlin. According to earlier reports, the city agreed to pay $1.2 million to use a portion of the building for recreational purposes.

Our subscribers make this reporting possible. Please consider supporting local journalism by subscribing to the Journal Sentinel at jsonline.com/deal.